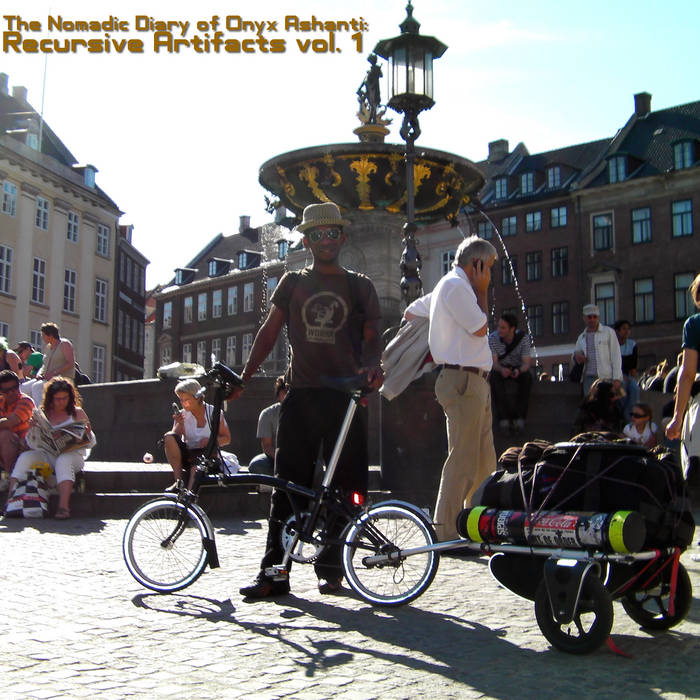 This is the download of the CD i sold as i busked around Europe during the summer of 2009. it is a collection of Recursive improvisations that i collected over the course of the last 2 years. There are a few pieces on here that are also in the "Recursive Artifacts Collection", but the collection is an ongoing repository for cool improvisations as they come to me, whereas, this "album" is a done deal ans is sequenced in such a way as to enhance your ability to listen to it as a whole.

This is the dedication i included in the handmade cd packaging;

My Life of Travel and music always terrified and excited my mother in equal measure. I'd like to think she would have felt the same way about this Disc. I love you and miss you Mamma...

After the death of my mother in 2007 I was lost. The reality that we only have a very short time here in this form was hanging, rain cloud-like, over everything. I really did not know what to do next. or why. But then I remembered how my mother would love my inconsequential stories of life playing on the streets of san francisco or touring with Soul II Soul. she was always so afraid that something could happen to me in the midst of flinging myself around the world on a whim, but would instantly relax when i would call home to tell of some new adventure, enabled by music. eventually, she came to revel in my adventures with me. Before she passed, she told me that she really loved that I live my life on my own terms. that i didn't let fear keep me in a life i didn't want. But after her death i felt like i had lost my compass. Why was i doing what i was doing, really?
I came to realize that much of my artistic life for a few years had actually been overrun by fears; fear of doing my own thing...fear of not really knowing what "my own thing" was, or if I or anyone else would even like it if i did. I was afraid of not knowing I wanted to do, artistically. It was a lot to think about while helping my family rebuild our collective lives in the aftermath of her passing.

In her memory I decided that I wanted to be the person she thought I was; fearless. I knew at that moment that I wanted to truly follow my own path...to create my own music my own way. I decided at that moment to perform all live all the time using a technique called "Live-looping", which is process of recording a repeating loop of a musician playing or singing, then layering themselves playing or sing another part, and on and on, until you have a full song playing. the technique has been around for decades. But along the way, I developed my own techniques which I call Beatjazz.

because I have performed with DJs for years, playing just about any type of instrument sound, including drums, along with the DJ set, I found that i could not only play everything, but I knew how to do it in the aesthetic of a sort of live, constantly evolving DJ set. so as I got better at this technique, I again started thinking about why I was doing this instead of something else. the answer; because I wanted to. And I am no longer afraid to admit that.

This album is a testament to that. The Nomadic Diary of Onyx Ashanti; Recursive Artifacts vol.1 is a collection of recordings taken during various Live performances from 2007-2009. Each is purely improvised, meaning that I had no idea, ahead of time, of what i was going to play when i played them. if you notice while listening to the CD, the pieces start with a particular type of sound and everything comes in, layer by layer, and is deconstructed and reconstructed in mutated forms. as pieces are built and destroyed, new sounds take their place. new directions are explored. truly exciting developments birth themselves from the always simple origins of a single, naked looped recording of a sound being played to the rhythm of life. And like life itself, the pieces are born, explore this existence in all of its wonder, and eventually return to nothing.

Thank you for listening and reading. There is more about Beatjazz on the CD-ROM portion of the Disc. Just click “CLICK HERE”. Live and love life...

This is an archive of sonomorphic notes spanning the last 22 years. they chronical the journey through the many fields of electronic music mutation happening around us all. i find it most interesting to go chronologically to hears the various idea trajectories and their life arcs and transformation into offspring idea trajectories. the end of Node:0 begins a digest for further idea propagation. ... more